Facts vs. Fiction
Information from Take Justice Back Website.

MYTH: America is suffering from a “litigation explosion” of personal injury lawsuits.

MYTH: Personal injury claimants and their lawyers clog up our courtrooms. 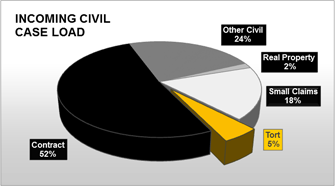 FACT: According to the NCSC, tort cases only make up five percent of the civil caseload. In fact, contract cases, which are more likely to involve corporations, are 10 times more numerous, making up 51 percent of the court’s work. While tort cases are on the decline, the number of contract cases rose 63 percent between 1999 and 2008.  [National Center for State Courts]

MYTH: Lawsuits are jackpot justice.  Winning a lawsuit is like winning the lottery. 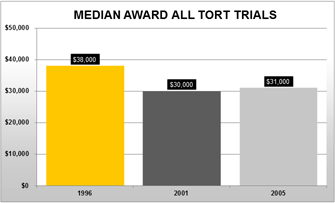 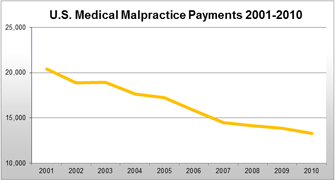 MYTH: Even if the number of medical malpractice cases is really going down, the ones that are left are still frivolous cases that cost millions of dollars.

FACT: According to NCSC the median award in medical malpractice cases is $400,000, as compared with $19,840 in other personal injury cases. But the NCSC also found that “damage awards are generally proportionate to the severity of the injury,” because medical malpractice cases tend to involve severe injuries. For instance, 22 percent of medical malpractice cases involve the death of the patient, as opposed to just three percent in other types of cases.  Nor are these cases, severe injury or not, frivolous. In 2006, researchers at the Harvard School of Public Health announced the results of a study showing that most negligence claims involve medical error and serious injury, and concluded “portraits of a malpractice system that is stricken with frivolous litigation are overblown.”  The researchers found that few claims were without merit, and those that were generally did not receive any money. Most negligence claims were meritorious, with 97 percent of claims involving medical injury and 80 percent involving physical injuries resulting in major disability or death. Few claims where there was not error were ever paid. Even Victor Schwartz, one of the biggest proponents of capping damages admitted, “There is no question that it is very rare that frivolous suits are brought against doctors. They are too expensive to bring.” [National Center for State Courts; New England Journal of Medicine; Los Angeles Times]