Registration has closed, please contact caitlin@washingtonjustice.org to be placed on a waitlist.
Details

Judge Keenan will talk about all-Zoom jury trials, from pretrial conference to verdict, including jury selection using electronic questionnaires and Zoom, electronic evidence handling, opening jury instructions when the jurors are all on Zoom, handling issues outside the presence of the jury, dealing with juror questions for witnesses, troubleshooting issues such as a juror becoming disconnected, questions and concerns about jurors being at home, closing instructions, and deliberations on Zoom. 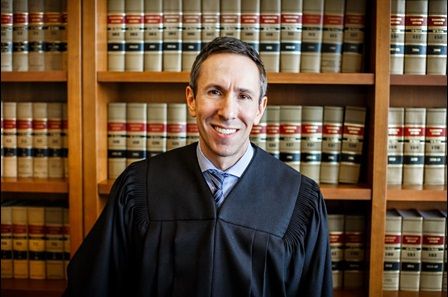 Judge Keenan joined the King County Superior Court bench in January 2017, and serves at the Maleng Regional Justice Center in Kent, where he presides over criminal and civil trials. Judge Keenan brings a unique perspective to the bench, having grown up in poverty and interacted with the judicial system as a young man.

Prior to being elected, Judge Keenan worked in complex civil litigation at the global law firm Orrick, Herrington & Sutcliffe, where he litigated cases in state and federal court. As an attorney, Judge Keenan frequently represented marginalized communities free of charge in civil rights matters, and has argued before the United States Court of Appeals for the Ninth Circuit. In 2011, at age 41, Judge Keenan became the oldest person ever to receive the Washington State Bar Association’s Outstanding Young Lawyer Award.

In addition to his pro bono work, Judge Keenan previously served on several boards in the non-profit, legal, and public sectors. Until taking the bench, Judge Keenan served as Board President at Northwest Justice Project, which is Washington’s largest provider of civil legal aid to low-income people, as well as on the Board of TeamChild, which provides civil legal aid to vulnerable youth. In addition, Judge Keenan served on the Washington Supreme Court’s Civil Legal Needs Study Committee in 2015 and 2016.

As President of the Federal Bar Association for the Western District of Washington in 2016, Judge Keenan served on merit selection committees for the reappointment of a United Sates Magistrate Judge and for the appointment of a United States Bankruptcy Judge. Judge Keenan also previously served on the Washington State Bar Association’s Judicial Recommendation Committee and the Bar’s Character and Fitness Board.

In 2014, while still a practicing attorney, Judge Keenan was appointed by the Mayor of Seattle to the Seattle Community Police Commission, where Judge Keenan helped represent the community in police accountability reform under a consent decree between the City of Seattle and the Department of Justice.

Though Judge Keenan was forced to withdraw from much of his work on civil legal aid and criminal justice reform when he was elected, he remains an active member of the Community Leaders Roundtable of Seattle, which oversees the 180 Program, an effort dedicated to keeping youth out of King County’s juvenile justice system.

Judge Keenan grew up in Seattle, where he spent much of his youth living on welfare and a public housing subsidy. Judge Keenan was actually charged as a juvenile defendant in King County Superior Court and was repeatedly suspended from the Seattle Public Schools before dropping out of high school and eventually earning his GED. Judge Keenan credits caring mentors for helping him redirect his life and for his eventual path to the judiciary.


Zoom information will be included in your registration confirmation email.


Registration has closed, please contact caitlin@washingtonjustice.org to be placed on a waitlist.
Questions?