Fighting Racism Through the WA Courts with Lem Howell


Registration is closed, please contact raphaela@washingtonjustice.org with questions or to be placed on the waitlist.
Details 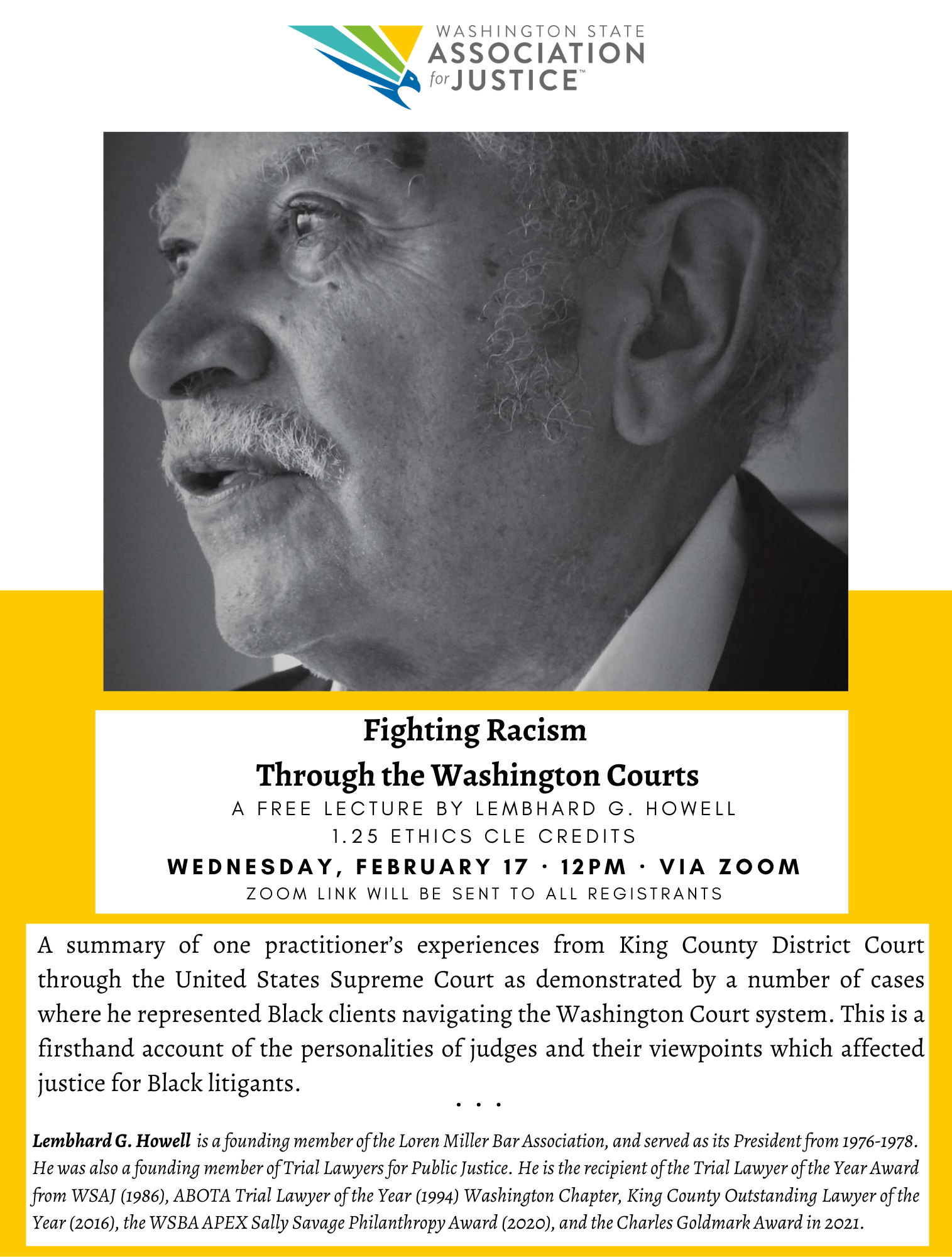 This is a summary of one practitioner's experiences from King County District Court through the United States Supreme Court as demonstrated by a number of cases where he represented Black clients navigating the Washington Court system. It is a firsthand account of the personalities of judges and their viewpoints which affected Black litigants.

LEMBHARD G. HOWELL received his undergraduate degree from Lafayette College (A.B.) in 1958 with Honors in history and his law degree from New York University School of Law in 1964. In 1965 he served as a law clerk on the Washington State Supreme Court. From 1966 to 1968, he served as an Assistant Attorney General for the State of Washington.
He served as Parliamentarian and Treasurer of A TLA, Washington State Bar (Bar Examiner 1974-1976, Board of Governors, 1989-1992), King County Bar, Loren Miller Bar Association (a founding member and President 1976-1978), American Bar Association (Standing Committee on the Federal Judiciary 1992-1996), American Judicature Society, the National Bar Association (Board of Governors), the International Society of Barristers, and the American Board of Trial Advocates. He was also a founding member of Trial Lawyers for Public Justice.
Howell was admitted to practice in the U.S. Supreme Court, U.S. District Court: U.S. District Courts for the Eastern and Western Districts of Washington, North Dakota, N.E. District; U.S. Court of Appeals for the Eighth and Ninth Circuits and the Washington State Supreme Court.
He is the 1986 recipient of the "Trial Lawyer of the Year" from WSTLA, and ABOTA Trial Lawyer of the Year (1994) Washington Chapter. He also received the King County 2016 Outstanding Lawyer of the Year. He got the WSBA 2020 APEX Sally Savage Philanthropy Award and the Charles Goldmark A ward in 2021.

Credit
This program has been approved for credit in the following jurisdiction(s):

Credit has been approved with the Washington State Bar Association for 1.25 Ethics credits.


Zoom instructions will be sent in your confirmation email once registered. Please contact raphaela@washingtonjustice.org with questions.


Registration is closed, please contact raphaela@washingtonjustice.org with questions or to be placed on the waitlist.
Questions?